On the Road Again: Driving in Thailand

by Roshan D'Silva
in Living Your Dream Series
0

Almost every day, I have this time when I am totally terrified.  It is when I am on the road driving around Chiang Mai.  I love living in Thailand so much, and I love my city, and the Thai people, but I don’t love driving here.  It is a very scary experience that I try to get through and then go somewhere and calm down.  It is very dangerous.  There are over 20,000 deaths each year on Thailand’s roads.  For comparison, the highly populated United States of America had a bit less than 33,000 deaths on the highways, but the population is about 5 and quarter times the population of Thailand.  Italy, which has roughly the same population as Thailand and has a reputation for crazy driving has about 8000 road deaths a year.  Thailand has 2 and half times more road deaths than Italy with the same population.  There is a problem.  And I feel it every time I am on the road here.

The road builders have conveniently painted these white lines on the road designating lanes for a multiple lane road.  They should have saved their efforts and not bothered.  Drivers here have no problems straddling two lanes and driving slower than anyone, so that traffic backs up behind them.  Then some drivers hop over in the far right of the road — actually off the road in the center, or in the lanes going the other way in order to pass the slow lane straddling car.  Happens all the time, not some unusual situation.

Driver’s licenses can be obtained if you pay a fee with no driving test, and it shows.  Some people joke that 8 year olds can get a license.  From what I have learned, you don’t even need a license anyway.  There are no cops patrolling the street, none — that’s not the way of Thai traffic enforcement —- and there are occasional road checks where cops just flag through 95% of the cars (they like stopping people that drive motor scooters without a helmet, but the percentage of those without helmets is so high, they only stop very few of them).  If by the odd circumstance a person is stopped at a road check, 200฿ (about $6.60 USD) on the spot takes care of the problem.  Same amount if you have no helmet, are driving too fast or have no license. Almost any situation.  Kind of a standard fee.

Speed limits are ignored if there are any posted (which is rare).  On a very small soi (one lane road) in central Chiang Mai, you might easily see a pick-up truck barreling out at about 80 KPH (about 40 MPH) where they should be going about 20-30 KPH or less because it so narrowly misses parked cars or motor scooters squeezing by. 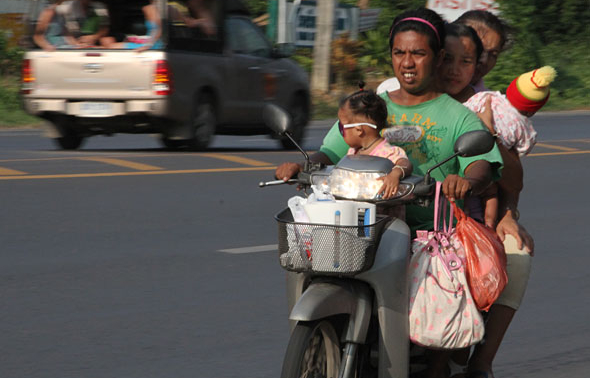 A little word about scooters: this is the main transportation in Chiang Mai.  A scooter is designed for one person, but in Chiang Mai it is extremely common to see three people on a bike, often see four and every once in a while see five, plus maybe a dog in the handle bar basket.   Now mind you this is just a little 125cc bike with a top speed of maybe 60 KPH with one person.  With four or five, it is very slow, plus the driver is likely to also be talking on his cell phone, and wiggling around slow or stopped cars.  It is a major source for amusement, but anyone that has lived here for some time has seen a little carnage on the road as one of these overloaded bikes was hit by a speeding truck loaded with farm produce.

And another scary part of this is that motor scooters is the usual transportation for tourists to Chiang Mai that are unfamiliar with scooters, unfamiliar with driving on the Thai side of the road, and unfamiliar with how Thais barely follow common driving precautions.  So if you visit Chiang Mai, please be very, very careful and try to ride in a big tourist van as much as possible.

Scooters are often driven by very young children that look about 10-12 years old.

It is a circus on the roads, and a dangerous one.

Another major contributor to road deaths in Chiang Mai and elsewhere in Thailand is the tolerance for drunk driving.  It is considered the norm.  There are many national celebrations where drinking is a big part of the celebration.  The local newspapers are full of stories around holidays of horrible car accidents.

So whenever you drive in Chiang Mai, you have to be totally alert, looking in all directions, with the eyes in the back of your head full functioning.  People will casually walk right out in the street right in front of you, and you are not supposed to run them over (but pedestrians do not have the right of way here).

And then after thinking about Chiang Mai, think about Bangkok.  In the big Mango, driving is as close to impossible as you can get.  It is a hundred times worse than in Chiang Mai.  My astute opinion on this matter is this:  no Westerner, no matter how confident they feel about their driving and their experience level, should ever drive in Bangkok.  Period.  Take a taxi (and thank God there are plenty and they are good and they are cheap).  If you are just a little suicidal, take a Motorcycle Taxi.  You will get there faster on a Motorcycle Taxi, but it is not for the faint of heart.  It can be very scary.  Take a tuk-tuk once in your life for the experience, and then stick to the nice air conditioned taxis after that.  There is also a lot of very good public transportation in BKK like Skytrains that are very good.

But back to Chiang Mai, there are not loads of taxis.  Very few and far between — mostly just at the airport.  There are tuk-tuks, and they are as crazy and somewhat dishonest just as they are in BKK.  Public transportation is down to pretty much the Songtheaws (pick-up truck mini buses) but they are not very flexible about driving off the major roads.  That’s why most people here for any length of time get into driving their own motor scooter.

There are signs all over Chiang Mai and most of the smaller cities of Thailand promoting the idea of wearing helmets when on a scooter.  Do your own count.  I figure that there is about 15% compliance with the law.

A similar law is with seat belts.  The cars here, just like in the US make funny noises when the driver does not put on a seat belt.  That sound has often been disabled.  No one in a back seat ever wears a seat belt.  And in pick-up trucks (more than half of the cars on the road are pick-up trucks), the back of the truck is designed to hold kids or lower level laborers.  Almost every truck, and some trucks are way over loaded, have people in the back, sometimes so much so that there is no room to even sit and they have to stand up.

When I get to a stoplight, I am usually surrounded by 30-40 scooters, most overloaded with helmet-less riders.  They usually take off a couple of seconds before the light turns green, but they are much slower than a car, so in about two seconds, my car is trying to pass them while not hitting any.  If it were not so life-threatening, it would be like some sort of computer game — miss all the scooters as you drive right through a crowd of them.

Also when a light turns green, it is very likely that a car in the outer lane wants to turn right by turning in front of the cars going straight.  Near collisions all the time.

Now I am going to tell you the most amazing part of all about driving in Chiang Mai:

Driving is total chaos and no one seems to obey any kind of rules of the road and have perhaps two or three near death experiences per kilometer.  Despite all that, Thai drivers are the most calm drivers in the world.  No one honks the horn ever more than a tiny peep to let someone know that they are there.  Nobody screams, no middle finger salutes, no cursing, no anger, no nothing.  You do not hear horns blasting or see any road rage.  It just doesn’t happen.  Thais calmly accept the disasters that happen on the highways and are totally relaxed while everybody is driving crazy.  If the same things happened in Los Angeles, there would be fist fights and maybe a few guns would come out.  Thais will just smile and not even think about it.  It is the Thai way.

First Aid and Safety Measures at Your Holiday home