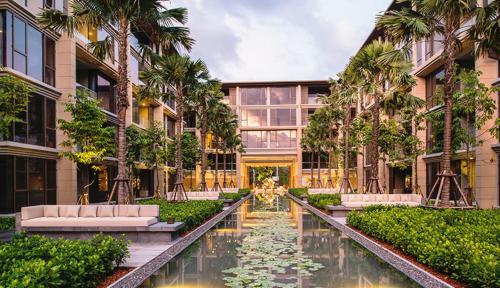 Phuket is Asia’s number one holiday home market and one of the world’s most desirable destinations, where the tourism industry enjoys healthy, steady growth. However as beachfront land is becoming scarce elsewhere on the island, Mai Khao on the other has now become an attractive proposition for developers. The Anantara Phuket has recently opened on Mai Khao beach, joining the established JW Marriott and Sala properties. The area is poised to be a significant destination with critical mass based on additions to the hotel pipeline including properties from Holiday Inn, Outrigger and Renaissance

Today we are featuring a beachfront condominium development near the Mai Khao beach which we think is a great project to invest in if you are looking for a home near the quickly vanishing coastline of the island.

After buyers showed significant demand in Sansiri’s earlier projects in Phuket, the loyal following of the developer continued with good inquiries received by the developers for its recent launch of Baan Mai Khao – a beachfront condominium development in the Mai Khao area.

Additionally, Baan Mai Khao, Phuket is the first freehold beach condominium development in Thalang district, north of Phuket. To put it in the words of Apichart Chutrakul, CEO of Sansiri Public Company Limited: “Baan Mai Khao Phuket is Sansiri’s first premium-class Phuket beachfront condominium project and, here, we have created a totally relaxed ambiance where you will feel totally invigorated day after day.”

Situated on a 5.42 acres plot on Mai Khao beach, the development is designed to give residents the opportunity to enjoy the landscaped gardens and a 70-meter swimming pool stretching the full length between the condominium buildings and the beach.

Location:
The development is located in the Mai Khao area which is already home to several upscale hotels and real estate players see good growth potential that can be compared to the development of Bang Tao in the early 1990s at the start of Laguna Phuket. The neighborhood has a distinct up-market feel with good hospitality chains including SALA Phuket Resort & Spa, Renaissance Phuket Resort and Spa and JW Marriott. Meanwhile, the Phuket International Airport is also just a short distance away.

About the developer:
Sansiri is one of the largest real estate developers in Thailand offering a full range of housing units; single-detached houses, semi-detached houses, townhouses, and condominiums. The Company remains the first and only South East Asian developer to have received the prestigious Commendation for Excellence Awards by Asia Pacific Commercial Real Estate (APCRE). The residential housing portfolio of the company includes developments like single houses, town houses and condominiums. In Phuket the Bangkok giant has already invested nearly US$ 90 million in four projects comprising a total of 1,697 new homes.

Amenities:
Interestingly Baan Mai Khao is Sansiri’s first development in Phuket to feature a professional concierge service exclusively for residents  and will offer services including a nanny service and airport transfers.

Contact:
For more information on the development you can contact Sansiri’s sales team at +66(0)22013999 or email them at info@sansiri.com. You can also visit their website, www.sansiri.com/en/main/ for more details on the project.