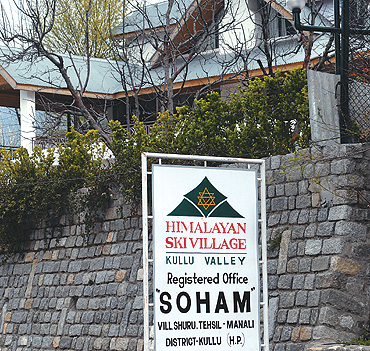 In our last article we had taken a look at the stalled Himalayan Ski Village project that was planned to be built in Manali in Himachal Pradesh. In this article we will take a look at all the reasons and issues behind the opposition to stop its construction and also try to find out whether these issues were actually justified as claimed.

The project soon after its approval was vehemently opposed by the BJP who was in the opposition then. There were many media reports that the hotel lobby in the Manali region, which draws large numbers of visitors, had feared a loss in business if the ski resort project came up was influencing the opposition. Interestingly a couple of reports alleged that some members of the hotel lobby were known to be close to the BJP leaders. The BJP in fact had organized a meeting of the holy men, who said the deities opposed the project. So was the opposition politically motivated?

Even now (in May) after the state government’s green signal to allow the construction of the Himalayan Ski Village, the BJP maintains its strong stance against it with its vice president Ram Swaroop Sharma saying that “it will never be tolerated.” Meanwhile, BJP’s closeness to Yoga Guru Ramdev is not a secret. So is the opposition from BJP a backslash to the Congress government’s decision to cancel the lease of Ramdev’s trust Patanjali Yogpeeth?

Back to 2007, a Manali NGO, Jan Jagran Avam Vikas Sansthan, had filed a petition in the high court for scrapping the project on the ground that it would adversely affect the ecology. The plea also claimed the Congress government violated guidelines in granting the approval. There were other NGOs too who voiced the same concerns. Many cited that the livelihood of the locals will be greatly affected, while others said there were environmental issues for which they were opposing the project.

So was it true that the Himalayan Ski Village would affect the livelihood of the locals of Kullu-Manali? John Robert Sims, the American hotel developer and MD of the Himalayan Ski Village project thinks otherwise: “The Ski Village would create 4,000 jobs, and bring hotels like the luxurious Six Senses Resorts and Spas to the valley. Many local residents, especially those involved in skiing, river rafting and other sports, supported the project.” The promoters say that they had offered local residents training and jobs, and even sent 60 young people to Finland for skiing lessons.

To top it all there were other allegations too. Many people alleged that the developers had bought land for one-third the price. Sims acknowledged the fact and said in an interview to The New York Times that “some land deals were struck at lower prices, but added that those prices were reached through negotiations.” But could this not been sorted out instead of stalling the entire project?

These are just allegations, counter allegations and views and opinions of both the parties. In our pursuit to get an expert’s insight into the issues that clouded the project we spoke to Manshi Asher, an independent researcher who has been working on issues of livelihood and environmental rights for more than a decade now. Her research paper titled ‘Impacts of the Proposed Himalayan Ski Village Project in Kullu, Himachal Pradesh’ is also seen as the Chicago Manual. In an email communiqué to Holiday Home Times she gives her views to a few queries put forward by us:

Can you please outline the main findings of your research vis-a-vis the Himalayan Ski Village resort? Do you see the project having an adverse effect on the environment as is being claimed?
Of course! The Executive Summary of the project indicates that the project involves development of 5, 7 and 4 star hotels, vacation homes, condos, chalets, gondolas, ropeways, restaurants, shopping malls, coffee houses and entertainment facilities, skiing and snow-boarding activities. This scale of activity in high forested slopes would clearly involve deforestation.

Meanwhile, the Company will tap raw water at 1,440 kiloliters per day from the Kothi Beas and Harnola Nalas (as given in the available extract). These nalas or streams are the main source of drinking and irrigation water in the villages downstream. Though at present the company claims that it does not plan to make artificial snow but there is no guarantee that this will not been done in future considering that there is a clause for this in the MoU. Villages fear that the use of chemicals in artificial snow making will pollute the water sources rendering them useless for drinking. If water that is used to irrigate the apple orchards and farms is diverted then the local economy would be directly hit.

Then there are the customary user rights of the locals. Apart from the water, these forests are used for fuel-wood, timber and fodder by the local villages since time immemorial. Customary forest rights of at least four villages will be affected as access is bound to be restricted. The project will also be a burden on the Infrastructure. Most of all, we are concerned about how will Kullu-Manali’s infrastructure will cope with the increase in vehicular traffic and generally the huge inflow of tourists. The pollution as a result of vehicles in peak season is already taking a toll on the local environment. Manali needs relief from this kind of pressure, not an increase of it.

The promoters of Himalayan Ski Village cite that once the project is complete it could go a long way in improving the living conditions of the local population. What is your take on this?
What do the locals have to gain! Nothing, but petty jobs. Because the ownership lies not with the locals, but with the company. Also the current livelihood base of the local people is good – horticulture, agriculture and local tourism are providing enough cash. So do locals really need this and if they did then why the vehement opposition?

What next? Suppose the promoters go ahead with the development?
The locals will continue their opposition at every level – legal and public action – and of course there are environmental action groups like us advocating for community based and ecologically sustainable small tourism who will continue to campaign against such projects.

Do you see a middle path where the environmental issues are taken care of and the Himalayan Ski Village also sees the light of day?
The point is not just that. This will not only have environmental impact, but it involves buying local land to create cottages for sale. That’s a real estate project. And therefore cannot be passed off as tourism. Also much of the plans are not on the table – so there was some degree of secrecy about the exact blueprint of the project. But I will still say that there is no middle path for the Himalayan Ski village type model of tourism. It is oriented towards profit-making for a corporation and that would mean using all the resources – land, water, forests to make more and more money. We have heard stories of such type of mega tourism from other countries as well as in India. The local populations are almost always at the receiving end.

OUR VIEW ON THE CURRENT STATUS OF THE HIMALAYAN SKI VILLAGE PROJECT:

Our view is that the courts have ultimate jurisdiction on the matter and we have full faith in the judiciary. We would have liked to hear from the promoters of the project, but have been unable to speak to them.