Costa Rica, the happiest country in the world

Happiness, a very strong word that just by reading it makes your mind flow with good memories and laughter. However happiness is a relative term, because what for me being happy might be to stare at the waves of the ocean for you might be to eat your favorite dessert. We all struggle to find happiness and every human being on the planet makes decisions based on this statement. So happiness is a very powerful word that we certainly don’t take for granted.

Talking about happiness let’s consider the Happy Planet Index. At this point I can see very confused faces so let me explain a bit before we go into details.

This Happy Planet Index was created by the New Economics Foundation in 2006 as a way to measure human well-being and environmental impact. The index is designed to challenge well-established indexes of countries’ development, such as Gross Domestic Product (GDP) and the Human Development Index (HDI), which are seen as not taking sustainability into account. In particular, GDP is seen as inappropriate, as the usual ultimate aim of most people is not to be rich, but to be happy and healthy. The principle of the HPI  is based that most people want to live long and fulfilling lives, and the country which is doing the best is the one that allows its citizens to do so, whilst avoiding infringing on the opportunity of future people and people in other countries to do the same.

Considering all this explanation, it makes me very proud to announce that Costa Rica has ranked as the Happiest Country for two years in a row by the Happy Planet Index. 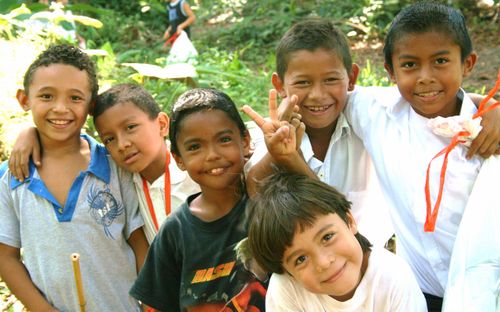 This country takes environmental issues  very seriously, even though there is a lot of improvement needed in this area, the “ticos” and the government makes a conscious effort in caring for the environment. For starters, more than 25% of its land is either a protected area or a National Park. Also, 78% of the country’s energy is produced by hydro energy, the Arenal Lake being the biggest dam of the country producing 40% of the country’s energy. Geothermal energy is used as well. The geothermal plant located in the Miravalles Volcano produces 7% of the country’s energy. Eolic energy has also taken off, producing 3% of the countries energy and recently the first solar plant in all Latin America has been built in Costa Rica to produce energy for more than 600 houses. These are examples of green energy that has been utilized in Costa Rica. All of this factors and the fact of having such a beautiful country full of life makes the friendly ticos very content with their life.

Perhaps, Costa Rica is not the richest country in the world but for sure the population is very happy for being born in this little piece of paradise. Another factor that may contribute in the happiness of the population might be the political stability and the fact that  Costa Rica is the most peaceful country in Central America and even South America. This is due to the fact that the army was abolished in 1948 and the budget previously used for the army was allocated to security, education and culture.

All these conditions have made Costa Rica a very popular country for retirement with great investment opportunities.  Talking to many foreigners and asking them why they have chosen this country amongst so many around the world, they have all agreed that their decision was made based on three factors: the political stability, being a tropical paradise and most importantly the fact that the country protects the environment. All these factors are the perfect combination for many foreigners to move or retire here and fulfill their ultimate goal of happiness! Come explore and experience Costa Rica with us and experience for yourself why we are the happiest country in the world!

Top Tips on Choosing the Right Location for your Holiday Home